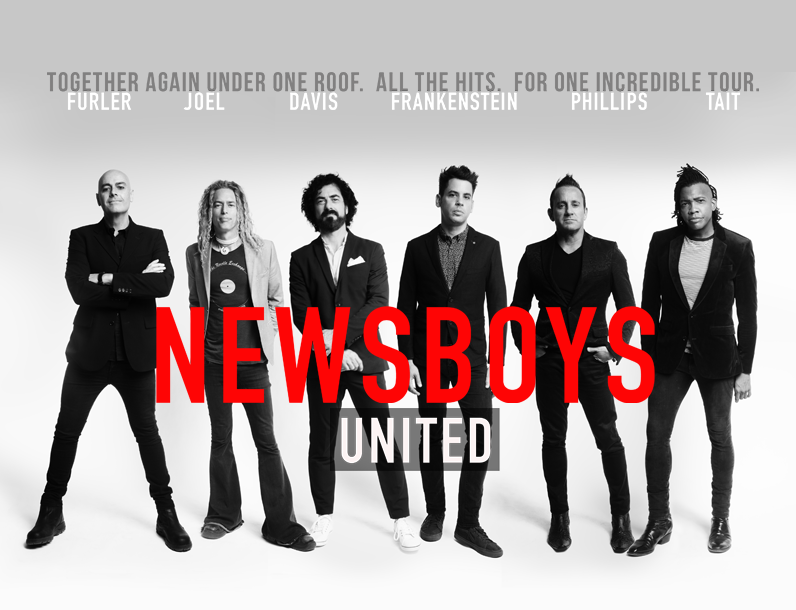 Following the abrupt blackout of GRAMMY®-nominated, Platinum®-selling Newsboys’ social media accounts, the band—with a little help from some old friends—reemerged today for a major announcement. Next year Newsboys will welcome back to the stage former bandmates Peter Furler and Phil Joel for the “Newsboys United Tour,” showcasing “all the hits… under one roof… for one tour.”

Along with an electrifying headlining set led by frontman Michael Tait and longtime members Duncan Phillips, Jeff Frankenstein and Jody Davis, Newsboys United will see Furler and Joel join the group for many of the most popular hits of the band’s three-decade career. The “Newsboys United Tour” will also feature special guest Word Worship recording artist Zealand, which is founded and fronted by Joel.

Hitting more than 40 cities in the spring—including Los Angeles, Houston, Minneapolis, Dallas and Orlando, Florida—tickets for the “Newsboys United Tour” will be available tomorrow, December 14, via an exclusive Spotify presale campaign. Regular presales are slated to begin December 15, with general ticket sales on December 18. For a complete list of “Newsboys United Tour” cities and dates, visit newsboys.com.